What is COP27 and who attended it?

COP27, which stands for “Conference of the Parties” is an annual summit led by the United Nations, where world leaders discuss action related to climate change. The parties are the attending countries that signed up to the original UN climate agreement in 1992. This year’s summit happened between 6th and 20th of November in Sharm El-Sheikh, Egypt. And although there has been a lot of progress made, it also didn’t shy away from problems.

On the positive side, the COP27 conference closed with a breakthrough agreement to provide “loss and damage” fund, that will provide financial assistance to nations most vulnerable and impacted by the consequences of climate change. Discussions on this topic have been going on for a while, and although it’s a historic decision, it is only the first step. Over the next year, until COP28, representatives from 24 countries will be working on what form the fund should take, which countries should contribute, and where and how the money should be distributed. Additionally, the UN is now looking into ways to target methane leakage, which relates back to COP26 and the Global Methane Pledge.

But as mentioned before, COP27 has its own share of “failures”. The biggest ones are definitely related to fossil fuels. So, what happened? Watchdog groups such as Global Witness have reported that over 636 fossil fuels lobbyist were granted access to COP27, a 25% increase since COP26 in Glasgow. A change in carbon credits and carbon market mandates, according to a few different sources including Quartz, leaves huge loopholes for greenwashing and withdrawing information from public knowledge. Lastly, and probably most importantly – there hasn’t been almost any progress in discussions on phasing out coal, oil and gas. According to Reuters, the tightening of emissions and action towards ending dependency on fossil fuels has been compromised by intense negotiations for the Loss and Damage Fund and the before-mentioned lobbying.

As said by Sameh Shoukry, Egypt’s minister of foreign affairs, in a statement late on November 17th: “There are still a number of issues where progress remains lacking. While some of the discussions were constructive and positive, others did not reflect the expected recognition of the need to move collectively to address the gravity and urgency of the climate crisis.” 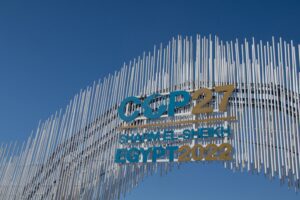 What does the COP27 in Egypt signal for the renewables sector for 2023?

So, is it all doom and gloom for the planet? Well, not necessarily. Despite the lack of action on emission targets and phasing out of fossil fuels, United Arab Emirates has recently signed a deal with the US called PACE – Partnership to Accelerate Transition to Clean Energy. This partnership is aimed to “catalyze $100 billion in financing, investment, and other support and to deploy globally 100 gigawatts of clean energy by 2035 to advance the energy transition and maximize climate benefits.”

EU signed partnerships to import green hydrogen, in order to help with decarbonization of heavy industries. Sustainable Energy Fund For Africa secured $64 million for renewable energy projects, and Indonesia reached a deal with US, Japan and several other countries to provide US$20 billion (of which half will be private finance) to transition its electricity grid off coal. This was the first deal from Just Energy Transition Partnerships by the G7 countries, aimed at helping India, Indonesia, Senegal and Vietnam to decarbonize.

So although many have named COP27 the “COP of unmet expectations”, there has been some progress there, and it definitely shows a positive sentiment when it comes to financing of renewable energy projects. In many countries around the world, energy security issues caused by conflict in Eastern Europe mean an accelerated effort on policy level to bring renewables to the forefront.

According to the BDO Global, by 2023, 33% of global electricity is forecast to come from renewable sources, with solar accounting for almost 60% of it. In 2022 alone, a plethora of renewable energy start-up received big amounts of funding, showcasing that there is a lot of investment opportunities in that sector.

Higher prices for oil, coal and gas are also an incentive for many to transition to renewable energy, as in certain cases, for example with solar energy, we’ve basically reached cost parity with the materials necessary, but the energy proved to be cheaper in comparison to one generated by fossil fuels. Additionally, in 2022, energy production and consumption has the highest number of startups and scaleups, which makes up 29.1% of climate tech companies, according to data from Net Zero Insights.

So although COP27 might not have been the most progressive as many would hope for, there is still a lot of hope for renewable energy and the entire GreenTech sector. The investment is there, and a plethora of disruptive startups pop up to make a difference and accelerate our transition to a greener future.

As leaders in the Clean Energy Recruitment market, we know that only the start-ups with a successful team behind them will bring these clean energy technologies to mark their contribution towards a sustainable future. For any hiring support or talent advice, do not hesitate to get in touch with us today!