The 6 Levels of Autonomous Driving

Autonomous vehicles are the future and promising to relieve traffic congestion, reduce emissions, and completely eliminate the stresses of parking, it’s no wonder why. But as you read up on the future of vehicles as we know it, you may have seen something called the levels of driving automation, from assistive level one to its level 5 autonomous counterparts. 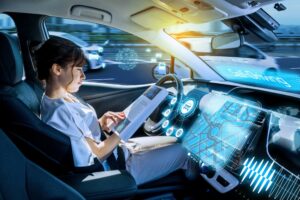 What are the levels of driving automation and what do they mean?…

Level zero is the baseline. At Level zero Autonomy, the driver performs all operating tasks like steering, braking, accelerating, or slowing down, and so forth. A simple anti-lock braking system (ABS) or automatic emergency braking is acceptable, but that’s pretty much it in terms of vehicle technology.

At this level, the vehicle can help with some tasks, but the driver is still in charge of all braking, accelerating, and environment monitoring. Imagine a vehicle that applies a little more braking pressure for you when you approach another vehicle too closely on a highway. One driver assistance technology is included in Level one. Take cruise control or lane-keeping assistance as examples. Both support the driving function yet call for the driver to retain their hands on the wheel at all times. Only when a vehicle makes use of a single driver aid technology can it be categorized as Level one. When several are used concurrently, it is seen as being at Level two.

The majority of automakers are now working on vehicles at this stage, when the car can help with acceleration or steering and spare the driver from some tasks. The driver is still in charge of the majority of safety-critical operations as well as all environmental monitoring and must constantly be ready to take control of the vehicle. Level 2 is only applicable to vehicles with advanced driver assistance systems (ADAS), which may simultaneously execute various driving-related duties. On some roadways, the vehicle navigates, center, accelerates, and brakes while the driver must maintain their hands on the wheel. The key with Level two is that the human driver is still in full control, has their hands on the wheel, and drives most of the time.

The significant difference from Level two to Levels three and higher is that, as of Level three, the vehicle itself is in charge of all environmental monitoring (using sensors like LiDAR). At this level, the driver’s attention is still crucial, but when the environment is safe, they can deactivate “safety-critical” actions like braking and rely on the technology instead. At speeds under 37 mph, many Level three vehicles now on the road don’t need human care. With artificial intelligence at level three, traffic problems may be assessed, and appropriate responses can be made. The driver does not have to have their hands on the wheel at all times; they can be preoccupied while still being aware and prepared to take control.

Level four is the closer to the futuristic idea we had of self-driving vehicles. At Levels four and five, the vehicle is capable of steering, braking, accelerating, monitoring the vehicle and roadway as well as responding to events, determining when to change lanes, turn, and use signals.

At Level four, the autonomous driving system would first notify the driver when conditions are safe, and only then does the driver switch the vehicle into this mode. It cannot determine between more dynamic driving situations like traffic jams or a merge onto the highway. These vehicles may still have steering wheels and pedals, but not all of them do. This level doesn’t require any human driver assistance. The vehicles are geofenced in or bound by water.

A Level Five autonomous driving system removes the human driver altogether. This level of autonomous driving requires absolutely no human attention. There is no need for pedals, brakes, or a steering wheel, as the autonomous vehicle system controls all critical tasks, monitoring of the environment and identification of unique driving conditions like traffic jams.

Autonomous driving can be scary for those who don’t fully understand how it all works, but hopefully, this post helps you navigate the news around autonomous vehicles and understand at what levels companies are developing them. Now, how our society, government, and city planners will adopt and address this gigantic shift in transportation is a question for another time.

The public still have some reservations about riding in fully autonomous but seem to be open to a partially autonomous driving experience. This attitude also applies to autos because the majority of technology users have dealt with malfunctioning or erratic behavior from technological equipment. The worry of a technological accident will always be in the back of the minds of “drivers” because technology does not yet have the full capability for trust. Even though the future of autonomous vehicles is promising and exciting, anything more advanced than Level two won’t be in widespread production in the US for a few more years. This is the case because to security, or the lack thereof, rather than technological capabilities.

With news of Tesla having to recall 54,000 vehicles earlier in 2022 due to software malfunctions further stalled the rate of adoption from consumers. Tesla’s full self-driving (FSD) beta software is allowing cars to conduct rolling stops, or not coming to a complete stop at intersections. This presents a massive risk to both pedestrians and other cars.

Another hurdle that autonomous vehicles will face is that not all consumers view cars as a mechanism to get from point A to point B. Some enjoy the experience and process of driving.

However, there is evidence to support the claim that road accidents, which kills 1.2 million people year worldwide, are among the greatest hazards to citizens. Human error is frequently the cause of many tragedies, thus adopting software that is constantly on high alert will substantially reduce human error. We will see a lot more of the higher Levels of automation on the roads as more automakers implement this technology and acquire confidence through successful long-term deployment.

As of autumn 2022,  the industry is currently able to produce Level three autonomous vehicles but they are not allowed on the roads in the US (though they are in Germany). Some experts are suggesting that Level five will be available in 2024 or 2025, though mass adoption will likely lag behind, due to costs and of course, legislation. As touched on above, early adoption of Level four will likely begin in the taxi and transport industries where their ROI is highest. This will likely assist in producing the scale to drive down costs, making Level five (and then hopefully level five) available to all.

Autonomous vehicles are an emerging field of technology with heavy investments made by myriad billion-dollar corporations. One of the major benefits of autonomous vehicles that makes them so attractive is their ability to reduce human errors during driving and increase life satisfaction for humans: a reduction of boring commutes, unproductive time spent in traffic, and accidents.

Here at Storm4, we are proud to be a part of the movement towards a sustainable future. We are the trusted recruitment partner for GreenTech startups and scaleups at the cusp of climate innovation, helping them scale their teams with the best talent to spearhead operations and accelerate a net zero tomorrow. If you require support in finding talent, don’t hesitate to get in touch to speak with one of our specialist consultants who work exclusively across Engineering, DevOps, Embedded, Sales, Marketing, Data, Analytics, Product Management, Finance and Operations.